In fact, it is very easy to find a public transportation in Jakarta. Jakarta has very complete route that can take you to several destination. Let start from Jakarta Airport (Soekarno Hatta International Airport) to Downtown.

1. How to go from Jakarta Airport (Soekarno Hatta International Airport(SHIA)) to downtown

In each terminal in SHIA, the airport has free transfer bus to go to another terminal. SHIA has 3 passenger terminal which each serve their own route. So when you realize you depart in wrong terminal, just use free transfer bus to catch the flight quickly. The shuttle bus painted in yellow colour and depart about 5 – 10 minutes each.

Then how to go to downtown? Should be understood that Jakarta has 5 region and usually tourists choose destination in South and Central Jakarta which have many tourist destination. DAMRI, a public bus company has service to take passenger to several route.

They also have route to another city nearby: Bogor City, Bekasi, Cikarang resident area, Purwakarta city, and Serang City. The ticket fare are different depend on the destination but it is approximately from 30.000 IDR to 70.000 IDR. For complete information about fare, you can refer here

The favorite route is

1. Blok M, which close to Jalan Jaksa, street where traveler stay and get amusement in Jakarta. It will take 60-120 minutes depend the traffic. As update today, the bus will charge 30.000 IDR.

No time to stay in Jakarta? We can go directly to railway station. Jakarta has 4 railway station which hub from Jakarta to another city in Java Island.

Different as neighbor countries of Indonesia, Ride with bus take longer time than train. The traffic between cities in Java are very crowd. For example if you take train to Yogyakarta, it will spend 8 hours by train but 14 hours by bus. But bus charge price lower than the train. Just make sure you buy ticket in the counter to avoid fraud and higher price ticket scam.

4. Airport to Another cities near Jakarta

Damri has direct routes to provide land transportation to another cities near Jakarta. It will be cheaper than you take another option to go to another cities such as Bogor, Serang in the west of Jakarta, Purwakarta and Bekasi.

Some Tourist Destination in Jakarta

Since Jakarta has TransJakarta bus system, it has to be more easily to reach the destination around Jakarta. The Transjakarta bus system nowadays has about 16 corridor to bring you in almost of desirable destination in Jakarta. We can refer the map from here to find which route will be the best choice for us. The bus is easily to find with blue, grey, purple and red color depend on the corridor they serve. The ticket fare is same from 2000 IDR (05.00 – 07.00 am) and 3500 IDR from 07.00 am to 05.00 am). Certain routes has 24 hours service. 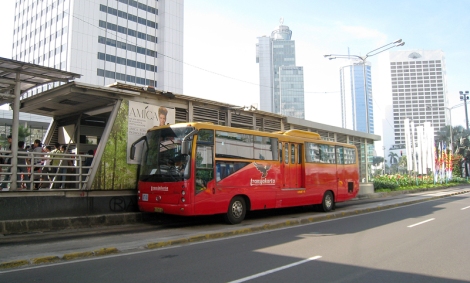 Make sure Taxi is in the last choice since the traffic is very crowd in almost of Jakarta street. It will spend too much for long distance destination.The taxi in Jakarta has 2 kind of fare: tarif atas (higher fare) The taxi who have higher fare are Blue bird and Silver bird and tarif bawah (lower fare): express taxi, taxiku, putra taxi

As known, Jakarta Provincial Government is going to operate five double-decker tour buses as an effort to increase tourist visit. Anyone who wants to go to tourism objects in the capital city does not have to pay a dime to get onboard these buses. As for the routes passed by these double-decker tour buses, they are HI Rounabout, Jl. Jenderal Sudirman, Semanggi, Jl. Gatot Subroto, Sultan Hotel, TVRI, Mulia Hotel, Senayan Plaza, Pemuda Statue, and then return to HI Round about through Jl. Jenderal Sudirman.

One of the oldest mass transportation in Jakarta is Commuterline. Now, the system is well established and it uses local electronic money to pay the fare. Commuter line is cheap when you travel from place to far place. the fare start from 2000 IDR for three stop and 500 IDR for each stop and has maximum price fare at 7000 IDR for farthest station. Manggarai, Stasiun Kota and Pasar Minggu is the biggest commuter line station and you can change to another transportation mode. 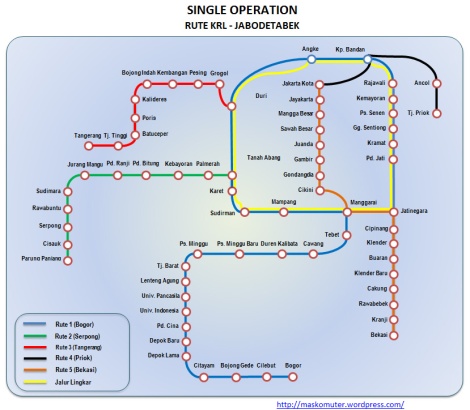 Bajai or Bajaj is operated in several area and prohibited in commercial area such as Thamrin, Sudirman street, Gatot subroto and in another main road.

So, let me count you all

PLEASE BE A TRAVELER, NOT A TOURIST, TRY NEW THINGS, MEET NEW PEOPLE, AND LOOK BEYOND WHAT'S RIGHT IN FRONT OF YOU, THOSE ARE THE KEYS TO UNDERSTANDING THIS AMAZING WORLD WE LIVE IN

"The World is a book, and those who do not travel read only a page." - Saint Augustine

wherever you go, take a bath only when necessary

The Science of Life

Traveling, Travel Photography, Postcrossing, Love Aceh and Indonesia so much, Culinary, and Living my Life

Global issues, travel, photography & fashion. Drifting across the globe; the world is my oyster, my oyster through a lens.

My Life, My Story

Gear to Survive the Zombie Apocalypse